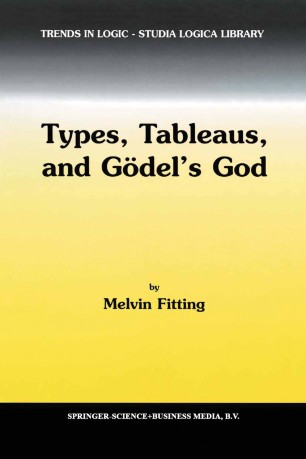 Part of the Trends in Logic book series (TREN, volume 12)

Gödel's modal ontological argument is the centrepiece of an extensive examination of intensional logic. First, classical type theory is presented semantically, tableau rules for it are introduced, and the Prawitz/Takahashi completeness proof is given. Then modal machinery is added, semantically and through tableau rules, to produce a modified version of Montague/Gallin intensional logic. Extensionality, rigidity, equality, identity, and definite descriptions are investigated. Finally, various ontological proofs for the existence of God are discussed informally, and the Gödel argument is fully formalized. Objections to the Gödel argument are examined, including one due to Howard Sobel showing Gödel's assumptions are so strong that the modal logic collapses. It is shown that this argument depends critically on whether properties are understood intensionally or extensionally.
Parts of the book are mathematical, parts philosophical. A reader interested in (modal) type theory can safely skip ontological issues, just as one interested in Gödel's argument can omit the more mathematical portions, such as the completeness proof for tableaus. There should be something for everybody (and perhaps everything for somebody).