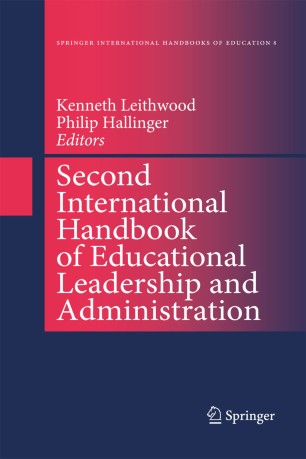 The first International Handbook of Educational Leadership and Administration (Leithwood et al.) was published in 1996 and quickly became something of a best seller for reference works within education. Such success, we suggest, was at least partly due to the unprecedented global waves of concern for improving schools launched in the mid 1980's, combined with a widespread belief in leadership as the single most powerful contribution to such improvement. The roots of this belief can be found in evidence produced by the early "effective schools" research, although there is a "romance" with leadership! as an explanation for success in many non-school enterprises, as well. During the two-year period during which this current handbook was being written, activity in the realms of school leadership, school improvement, and leadership development gained further momentum. The English government created its new National College of School Leadership, and several Asian nations announced new initiatives in leadership selection, preparation, and development.