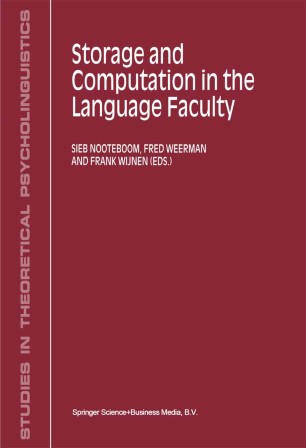 Storage and Computation in the Language Faculty

Every now and again I receive a lengthy manuscript from a kind of theoretician known to psychiatrists as the "triangle people" - kooks who have independently discovered that everything in the universe comes in threes (solid , liquid, gas; protons, neutrons, electrons; the Father, the Son, the Holy Ghost ; Moe, Larry, Curly; and so on) . At the risk of sounding like a triangle person, let me explain why I think that the topic of this volume - - storage and computation in the language fac­ ulty - though having just two sides rather than three, is the key to understanding every interesting issue in the study of language. I will begin with the fundamental scientific problem in linguistics: explaining the vast expressive power of language. What is the trick behind our ability to filleach others' heads with so many different ideas? I submit there is not one trick but two, and they have been emphasized by different thinkers throughout the history of linguistics.