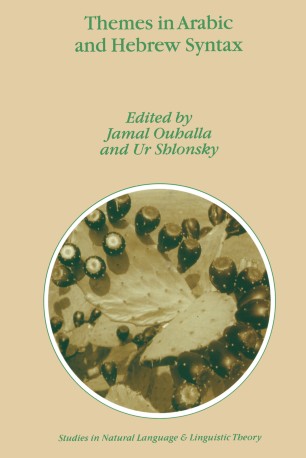 Themes in Arabic and Hebrew Syntax

The aim of this enterprise is to assemble together in one volume works on various syntactic aspects of Arabic and Hebrew, in the hope that it will spur further comparative work within the Semitic family at the level of richness achieved in other language families such as Germanic and Romance. Although a substantial amount of work on the syntax of Arabic and Hebrew already exists in various forms, volumes of the type we have attempted are still practically non-existent. Moreover, apart from some notable exceptions, existing studies rarely take a systematic within-family comparative stance towards the phenomena they discuss, although cross-references between studies on Arabic and Hebrew are not uncommon. Obviously, we would ideally have preferred the volume to include papers on numerous other Semitic languages, including the languages of the Ethio­ Semitic branch as well as numerous spoken varieties of Arabic that have yet to be explored. Unfortunately, this was not possible due to circumstances beyond our control. We very much hope that the existence of this volume will make more inclusive volumes on the syntax of the Semitic languages only a matter of time.