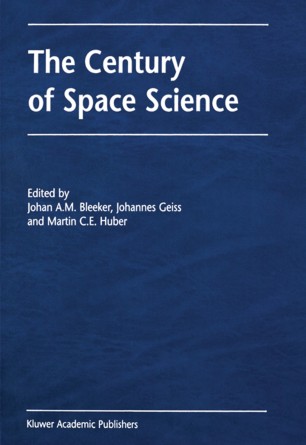 The Century of Space Science

One of the most attractive features of the young discipline of Space Science is that many of the original pioneers and key players involved are still available to describe their field. Hence, at this point in history we are in a unique position to gain first-hand insight into the field and its development. To this end, The Century of Space Science, a scholarly, authoritative, reference book presents a chapter-by-chapter retrospective of space science as studied in the 20th century. The level is academic and focuses on key discoveries, how these were arrived at, their scientific consequences and how these discoveries advanced the thoughts of the key players involved.

With over 90 world-class contributors, such as James Van Allen, Cornelis de Jager, Eugene Parker, Reimar Lüst, and Ernst Stuhlinger, and with a Foreword by Lodewijk Woltjer (past ESO Director General), this book will be immensely useful to readers in the fields of space science, astronomy, and the history of science. Both academic institutions and researchers will find that this major reference work makes an invaluable addition to their collection.