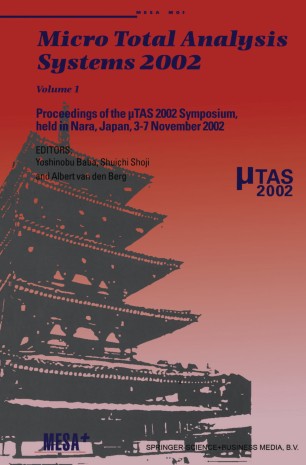 The Sixth International Conference on Miniaturized Chemical and Biochemical Analysis Systems, known as /JTAS2002, will be fully dedicated to the latest scientific and technological developments in the field of miniaturized devices and systems for realizing not only chemical and biochemical analysis but also synthesis. The first /JTAS meeting was held in Enschede in 1994 with approximately 160 participants, bringing together the scientists with background in analytical and biochemistry with those with Micro Electro Mechanical Systems (MEMS) in one workshop. We are grateful to Piet Bergveld and Albert van den Berg of MESA Research Institute of the University of Twente for their great efforts to arrange this exciting first meeting. The policy of the meeting was succeeded by late Prof. Dr. Michael Widmer in the second meeting, /JTAS'96 held in Basel with 275 participants. The first two meetings were held as informal workshops. From the third workshop, /JTAS'98 (420 participants) held in Banff, the workshop had become a worldwide conference. Participants continued to increase in /JTAS2000 (about 500 participants) held in Enschede and /JTAS2001 (about 700 participants) held in Monterey. The number of submitted papers also dramatically increased in this period from 130 in 1998, 230 in 2000 to nearly 400 in 2001. From 2001, /JTAS became an annual symposium. The steering committee meeting held in Monterey, confrrmed the policy of former /JTAS that quality rather than quantity would be the key-point and that the parallel-session format throughout the 3.