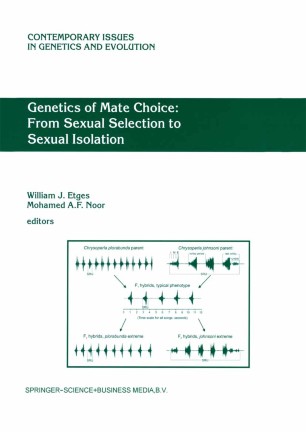 Genetics of Mate Choice: From Sexual Selection to Sexual Isolation

Part of the Contemporary Issues in Genetics and Evolution book series (CIGE, volume 9)

Genetic studies aimed at understanding the origin of species are dominating major scientific journals. In the past decade, genetic tools that were previously available only in model systems have become accessible to investigators working on nearly all species. Concurrent with these technical advances has been an increase in understanding of both the importance of considering the ecological context of speciation and testing hypotheses about causes for species formation. Many recent studies suggest a prominent role of sexual selection in species formation. These advances have produced a need for a synthesis of what we now understand about speciation, and perhaps more importantly, where we should go from here. In this volume, several leading investigators and rising stars have contributed reviews and/or novel primary research findings aimed at understanding the ultimate mystery on which Darwin named his most famous and influential book.
Fundamental to the origin of species is the evolution of mate choice systems. This collection of papers discusses burgeoning genetic, evolutionary, and ecological approaches to understanding the origins of mating discrimination and causes of premating reproductive isolation both within and between species. The individual contributions span a wide spectrum of disciplines, taxa, and ideas (some controversial). This synthesis brings together several of the most recent ideas with supporting empirical data.
This book will be of particular interest to both undergraduate and postgraduate researchers and students and researchers in the field of evolutionary biology, genetics and animal behaviour.