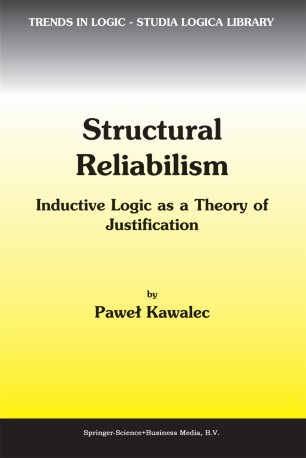 Inductive Logic as a Theory of Justification

Part of the Trends in Logic book series (TREN, volume 16)

Kawalec's monograph is a novel defence of the programme of inductive logic, developed initially by Rudolf Carnap in the 1950s and Jaakko Hintikka in the 1960s. It revives inductive logic by bringing out the underlying epistemology. The main strength of the work is its link between inductive logic and contemporary discussions of epistemology. Through this perspective the author succeeds to shed new light on the significance of inductive logic. The resulting structural reliabilist theory propounds the view that justification supervenes on syntactic and semantic properties of sentences as justification-bearers. The claim is made that this sets up a genuine alternative to the prevailing theories of justification. Kawalec substantiates this claim by confronting structural reliabilism with a number of epistemological problems. Kawalec writes in a clear manner, makes his theses and arguments explicit, and gives ample bibliographical references.