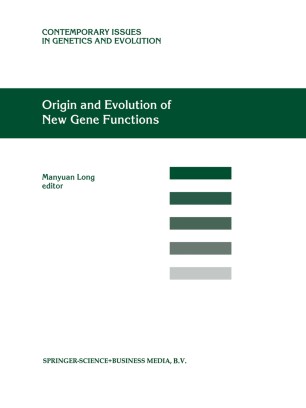 Part of the Contemporary Issues in Genetics and Evolution book series (CIGE, volume 10)

Although interest in evolutionary novelties can be that these different mechanisms cooperate in the mak­ traced back to the time of Darwin, the appreciation ing of new genes. In the second phase of new gene evolution, conventional models of new gene evolution, and systematical experimental pursuit of the origin and evolution of new gene functions did not appear for example by gene duplication, held that the muta­ until the early years of last decade. Since the 1970s, tions fixed in the early stages of the new genes are Susumu Ohno, Walter Gilbert, and others from the assumed to be neutral or nearly neutral. However, it area of evolutionary genetics have made pioneer ef­ appears that the force of Darwinian positive selection has been detectably strong from the outset in avail­ forts to elaborate possibilities for major biological mechanisms, for example, gene duplication and exon able population genetic studies of young genes created through the process of exon recombination. This may shuffling, by which new gene functions could arise. However, the problem of new gene evolution did not account for a common phenomenon in phylogenetic catch significant attention among biologists generally analyses of genes with changed functions: the early even recently. One of the reasons was the lack of ex­ stages of such genes are usually associated with accel­ perimental or observational systems for investigating erated substitution rates. Nonetheless, a more general factual details of the 'birth' process of new genes.