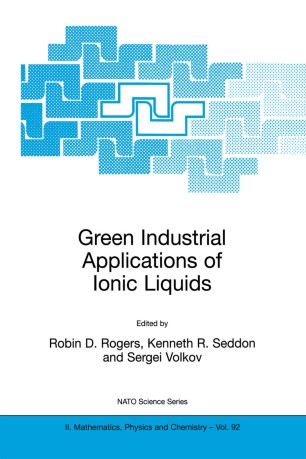 This book contains the lecture notes for the NATO Advanced Research Workshop on th Green Industrial Applications of Ionic Liquids held April 12th_16 , 2000 in Heraklion, Crete, Greece. This was the fIrst international meeting devoted to research in the area of ionic liquids (salts with melting points below 100 0c), and was intended to explore the promise of ionic liquids as well as to set a research agenda for the fIeld. It was the fIrst international meeting dedicated to the study and application of ionic liquids as solvents, and forty-one scientists and engineers from academia, industry, and government research laboratories (as well as six industry observers and four student assistants) met to discuss the current and future status of the application of ionic liquids to new green industrial technologies. It was immediately clear that the number of organic chemists and engineers working in the fIeld needed to be increased. It was also clear that the declining interest in high temperature molten salts and subsequent increase in low melting ionic liquid solvents had not yet taken hold in Eastern Europe. Participants from NATO Partner Countries contributed signifIcant expertise in high temperature molten salts and were able to take back a new awareness and interest in ionic liquid solvents.