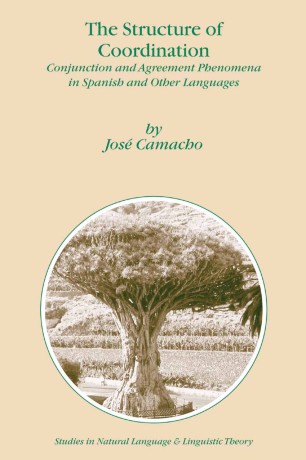 The Structure of Coordination

Conjunction and Agreement Phenomena in Spanish and Other Languages

This book analyzes the structure of coordination from two perspectives: the symmetrical properties the construction imposes on its conjuncts, and how conjuncts interact with other categories outside coordination with respect to agreement and other grammatical phenomena. A substantial amount of data represented in this book are taken from varieties of Spanish. Unlike English, Spanish has a rich pattern of overt agreement between the subject and the verb, between nouns and adjectives, and also between clitics and lexical DP objects and indirect objects. Spanish agreement paradigms reveal very interesting patterns of agreement mismatch that provide important theoretical insights. Unless otherwise specified, it can be assumed that non-English examples are from Spanish. IX CHAPTER #1 INTRODUCTION Although coordination has figured more or less steadily in the Generative tradition beginning with Chornsky's (1957) Conjunction Transformation (later known as Conjunction Reduction), until recently, the two prevailing areas of research had been ellipsis (see, for example, Van Oirsouw 1987) and the semantic interpretation of conjuncts.' The internal structure of coordination was usually left unanalyzed, or assumed to be ternary branching, as in (I).