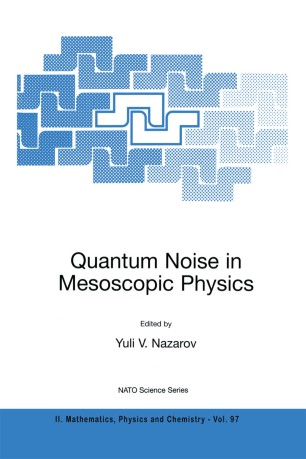 This book is written to conclude the NATO Advanced Research Workshop "Quantum Noise in Mesoscopic Physics" held in Delft, the Netherlands, on June 2-4, 2002. The workshop was co-directed by M. Reznikov of Israel Institute of Technology, and me. The members of the organizing committee were Yaroslav Blanter (Delft), Chirstopher Glattli (Saclay and ENS Paris) and R. Schoelkopf (Yale). The workshop was very successful, and we hope that the reader will be satisfied with the scientific level of the present book. Before addressing scientific issues I find it suitable to address several non-scientific ones. The workshop was attended by researchers from many countries. Most of them perform their activities in academic institutions, where one usually finds the necessary isolation from the problems and sores of the modem world. However, there was a large group of participants for which such isolation was far from perfect. War, hatred, and violence rage just several miles away of their campuses and laboratories, poisoning everyday life in the land of Israel.