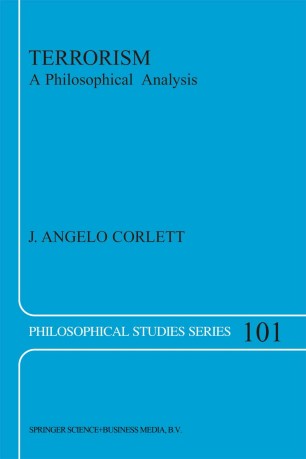 This book is the culmination of over 15 years of research on terrorism, secession, and related concepts such as the obligation to obey the law, pacifism, civil disobedience, non-violent direct action, political violence, revolution, and assassination. It is sincerely hoped that the content of this book is construed as an ethical and philosophical attempt to advance human understanding of some of life’s most intractable problems, namely, terrorism and more generally, political violence. This book is proffered as a propadeutic to further study of these issues and is not to be interpreted as the author’s final word on them. For the pursuit of truth and avoidance of error is never wholly complete, but at best a life-long process of continual reflection, analysis and argument. And it will please the author of this book if it brings even a modicum of knowledge to the difficulties it investigates. Some of the chapters of this book have been published or have otherwise experienced the critical assistance of various public academic forums, and I am sincerely grateful to those who have shaped my thinking about terrorism and its related concepts. Among those who have provided critical and helpful insights concerning various sections of the contents of this book are: David Copp, Richard Falk, Joel Feinberg, Richard W. Miller, and Thomas Pogge.

"What terrorism demands, from Americans in their power above all, is moral intelligence. Corlett's book provides nothing else. It applies an articulated morality to terrorism and to civil disobedience. It links these, originally, with secession. It makes philosophy work in the world we now know. It is clear, scholarly, reflective and argued thinking, essential to all of us. It seeks truths in passions. You do not have to agree with all of it to know it's value."
(Ted Honderich, Grote Professor Emeritus, University College London, UK)
"Terrorism: A Philosophical Analysis is an unusually thorough, careful treatment with some rather surprising tentative conclusions about terrorism and secession. This is a book that will challenge the serious reader, indeed. Corlett goes in for careful analysis, and doesn't flinch at conclusions that might be unwelcome to some. He's owed an answer, for sure."
(Jan Narveson, Professor of Ethics and Political Philosophy, University of Waterloo, Canada)
Buy options