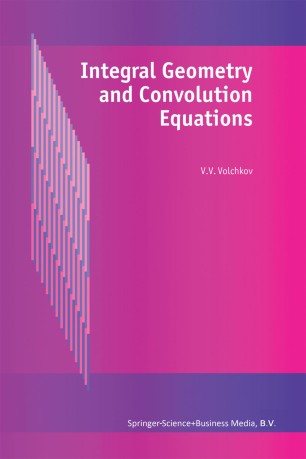 Integral geometry deals with the problem of determining functions by their integrals over given families of sets. These integrals de?ne the corresponding integraltransformandoneofthemainquestionsinintegralgeometryaskswhen this transform is injective. On the other hand, when we work with complex measures or forms, operators appear whose kernels are non-trivial but which describe important classes of functions. Most of the questions arising here relate, in one way or another, to the convolution equations. Some of the well known publications in this ?eld include the works by J. Radon, F. John, J. Delsarte, L. Zalcman, C. A. Berenstein, M. L. Agranovsky and recent monographs by L. H¨ ormander and S. Helgason. Until recently research in this area was carried out mostly using the technique of the Fourier transform and corresponding methods of complex analysis. In recent years the present author has worked out an essentially di?erent methodology based on the description of various function spaces in terms of - pansions in special functions, which has enabled him to establish best possible results in several well known problems.