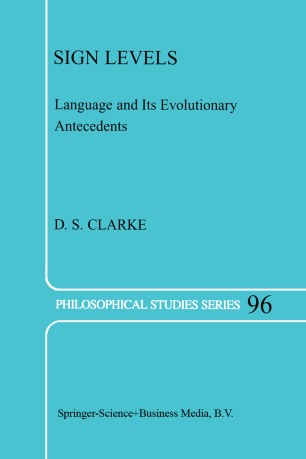 Language and Its Evolutionary Antecedents

Since the revolution in philosophic method that began about a century ago, the focus of philosophic attention has been on language as used both in daily conversation and in specialized institutional activities such as science, law, and the arts. But language is an extremely complex and varied means of communication, and the study of it has been increasingly incorporated into such empirical disciplines as linguistics, psycho linguistics, and cognitive psychology. It is becoming less clear what aspects of language remain as proper subjects of philosophical study, what are to be "kicked upstairs" (J. L. Austin's phrase) to the sciences. This work is a study of those logical features of language that remain central to philosophy after completion of kicking up. It conducts this study by describing similarities and differences between signs at differing levels, starting with natural events as primitive signs in the environments of their interpreters, and proceeding to pre­ linguistic signaling systems, elementary forms of language, and finally to the forms of specialized discourse used within social institutions. The investiga­ tion of comparative features requires isolating basic mental capacities that are present in the most primitive forms of organisms capable of sign interpretation. The problem then becomes one of tracing the emergence from these capacities of such categories as substance, attribute or quality, and quantity that we apply to natural languages. The study of sign levels is thus the construction of a genealogy of logical categories marking the develop­ ment of natural languages.