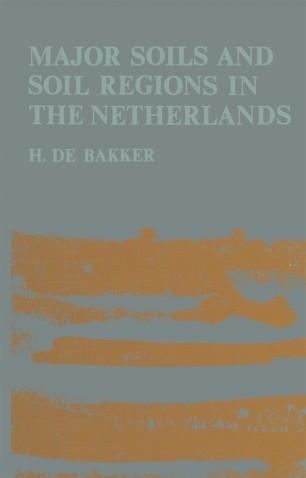 Major soils and soil regions in the Netherlands

Soil science in the Netherlands puts strong emphasis on the relationship between parent material and soil formation, and between physiographic conditions and land use. This approach, developed by the late Professor Dr C. H. Edelman ( 1903-1964), is quite understandable in a country where soils have to a great extent developed from alluvial and aeolian materials of recent geological origin. Dutch soil scientists have paid much attention to pedogenesis in fresh sediments, known as 'initial soil formation' or 'ripening', and to groundwater as a soil forming factor. Furthermore, human influence on soil genesis, in this land of man-made soils, has been tho­ roughly investigated. 'Major soils and soil regions in the Netherlands' clearly reflects these specific features of soils work in this country. In his book, Mr H. de Bakker, Head of the Soil Classification Section of the Netherlands Soil Survey Institute (Stichting voor Bodemkartering) addresses the special interests of foreign soil scientists and of students of earth sciences. The author examines representative soil profiles not only with respect to the Netherlands' system of soil classification- of which he is the co-author-but also in terms of some of the major classification systems used in other countries. It appears that a well characterized soil profile may find a very different place in various classifications and that even for a trained specialist it is often difficult to arrive at a specific determination within a given system.