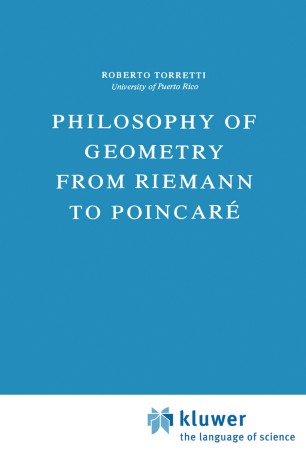 Philosophy of Geometry from Riemann to Poincaré

Geometry has fascinated philosophers since the days of Thales and Pythagoras. In the 17th and 18th centuries it provided a paradigm of knowledge after which some thinkers tried to pattern their own metaphysical systems. But after the discovery of non-Euclidean geometries in the 19th century, the nature and scope of geometry became a bone of contention. Philosophical concern with geometry increased in the 1920's after Einstein used Riemannian geometry in his theory of gravitation. During the last fifteen or twenty years, renewed interest in the latter theory -prompted by advances in cosmology -has brought geometry once again to the forefront of philosophical discussion. The issues at stake in the current epistemological debate about geometry can only be understood in the light of history, and, in fact, most recent works on the subject include historical material. In this book, I try to give a selective critical survey of modern philosophy of geometry during its seminal period, which can be said to have begun shortly after 1850 with Riemann's generalized conception of space and to achieve some sort of completion at the turn of the century with Hilbert's axiomatics and Poincare's conventionalism. The philosophy of geometry of Einstein and his contemporaries will be the subject of another book. The book is divided into four chapters. Chapter 1 provides back­ ground information about the history of science and philosophy.