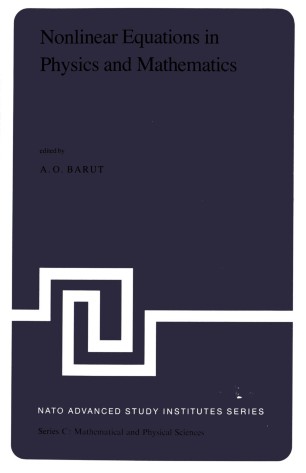 Nonlinear Equations in Physics and Mathematics

This is the third Volume in a series of books devoted to the interdisciplinary area between mathematics and physics, all ema­ nating from the Advanced Study Institutes held in Istanbul in 1970, 1972 and 1977. We believe that physics and mathematics can develop best in harmony and in close communication and cooper­ ation with each other and are sometimes inseparable. With this goal in mind we tried to bring mathematicians and physicists together to talk and lecture to each other-this time in the area of nonlinear equations. The recent progress and surge of interest in nonlinear ordi­ nary and partial differential equations has been impressive. At the same time, novel and interesting physical applications mul­ tiply. There is a unifying element brought about by the same characteristic nonlinear behavior occurring in very widely differ­ ent physical situations, as in the case of "solitons," for exam­ ple. This Volume gives, we believe, a very good indication over all of this recent progress both in theory and applications, and over current research activity and problems. The 1977 Advanced Study Institute was sponsored by the NATO Scientific Affairs Division, The University of the Bosphorus and the Turkish Scientific and Technical Research Council. We are deeply grateful to these Institutions for their support, and to lecturers and participants for their hard work and enthusiasm which created an atmosphere of lively scientific discussions.