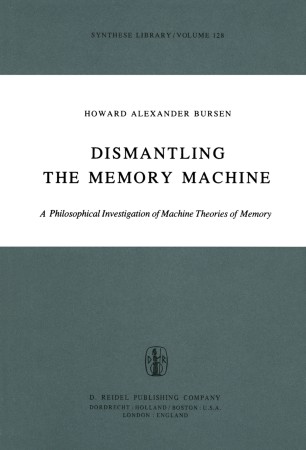 A Philosophical Investigation of Machine Theories of Memory

The subject of the following study is theories of memory. The first part is a study of one broad type of theory which is very widely adhered to at this time. It enjoys great popularity among neuro­ physiologists, neuropsychologists, and, more generally, among scientifically oriented people who have directed their attention to questions about memory. Further, this way of looking at the matter is not confined to scientific professionals. Indeed, we can find popularized versions of the view in magazines like Time and Reader's Digest. So in the first part of the book, I will give a presentation of the view in its general form. The theory will be presented in such a way as to reveal the features which make it tempting, which make it seem to be a very natural way to explain the phenomena of memory. (And, clearly, from the number of adherents the view has won, it is tempting, and it does seem to be to go about explaining memory. ) After setting forth a natural way this generalized version of the theory, I will next present material by various authors who hold this view. This will allow the reader to get some idea of the different forms which the theory (the 'memory trace' or 'engram' theory) takes. The last step is a critic­ ism of the theory. In the second part of the book, the attack on trace theory will be strengthened by a further criticism.