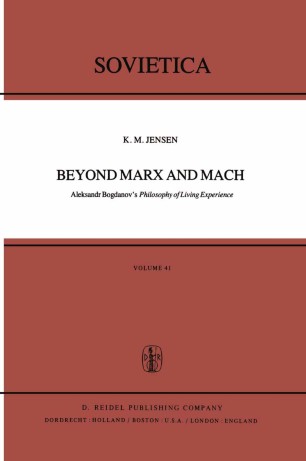 Beyond Marx and Mach

A. ALEKSANDR BOGDANOV On April 7, 1928 the career of one of the most extraordinary figures of Russian and early Soviet intellectual life came to an abrupt and premature end. In the process of an experiment on blood transfusion, Aleksandr Aleksandrovich Malinovsky, better known as Bogdanov, had exchanged his blood with that of a critically ill malaria victim in hopes of saving both the patient and his blood. The outcome of this may be guessed: both doctor and patient died forthwith. ! Although an extraordinary venture on Bogdanov's part, for it was part of a search for the means to immortality,2 the transfusion experiment was only one of a host of startling things he had done in his thirty years in Russian politics and public life. In actuality, the activities and achievement of his two years as director of the Soviet Union's first institute for the study of blood transfusion seem virtually insignificant beside the events of earlier years. 3 It would be fair to say that Aleksandr Bogdanov stood in a singularly prominent position in the political and intellectual life of Russia from the turn of the century to 1930. Politically, he had been Lenin's only serious rival for leadership among the Bolsheviks before 1917. In the early years of the Soviet regime, Bogdanov stood head and shoulders above any other public figure operating outside the ranks of the Party. Only a handful of men, i. e.