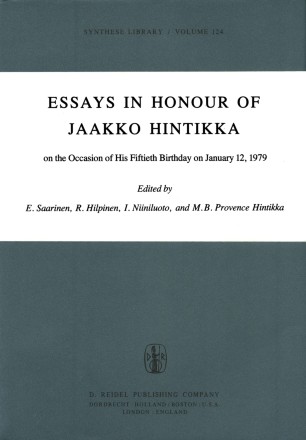 Essays in Honour of Jaakko Hintikka

On the Occasion of His Fiftieth Birthday on January 12, 1979

Jaakko Hintikka was born on January 12th, 1929. He received his doctorate from the University of Helsinki under the supervision of Professor G. H. von Wright at the age of 24 in 1953. Hintikka was appointed Professor of philosophy at the University of Helsinki in 1959. Since the late 50s, he has shared his time between Finland and the U.S.A. He was appointed Professor of philosophy at Stanford University in 1964. As from 1970 Hintikka has been permanent research professor of the Academy of Finland. He has published 13 books and about 200 articles, not to mention the various editorial and organizational activities he has played an active role in. The present collection of essays has been edited to honour Jaakko Hintikka on the occasion of his fiftieth birthday. By dedicating a Festschrift to Jaakko Hintikka, the contributors wish to pay homage to this remarkable man whom they see not only as a scholar of prodigious energy and insight, but as a friend, colleague and former teacher. The contributors hope the essays collected here will bring pleasure to the man they are intended to honour. All of the essays touch upon topics Hintikka has taken an direct or indirect interest in, ranging from technical problems of mathematical logic and applications of formal methods through philosophical logic, philosophy of language, epistemology and history of philosophy to philosophical aesthetics.