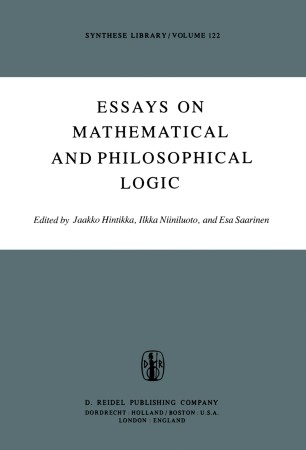 Essays on Mathematical and Philosophical Logic

The Fourth Scandinavian Logic Symposium and the First Soviet-Finnish Logic Conference were held in JyvaskyIa, Finland, June 29-July 6, 1976. The Conferences were organized by a committee which consisted of the editors of the present volume. The Conferences were supported financially by the Ministry of Education of Finland, by the Academy of Finland, and by the Division of Logic, Methodology, and Philosophy of Science of the International Union of History of Science. The Philosophical Society of Finland and the Jyvaskyla Summer Festival gave valuable help in various practicalities. 35 papers by authors representing 10 countries were presented at the two meetings. Of those papers 24 appear here. THE EDITORS v TABLE OF CONTENTS PREFACE v PART 1/ PROOF THEORY GEORG KREISEL / Some Facts from the Theory of Proofs and Some Fictions from General Proof Theory 3 DAG PRAWITZ / Proofs and the Meaning and Completeness of the Logical Constants 25 v. A. SMIRNOV / Theory of Quantification and tff-calculi 41 LARS SVENONIUS/Two Kinds of Extensions of Primitive Recursive Arithmetic 49 DIRK VAN DALEN and R. STATMAN / Equality in the Presence of Apartness 95 PART II / INFINITARY LANGUAGES VEIKKO RANTALA / Game-Theoretical Semantics and Back-and- Forth 119 MAARET KAR TTUNEN / Infinitary Languages N oo~.