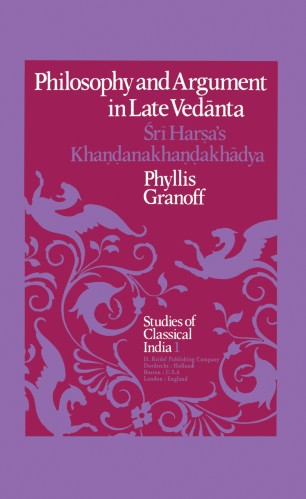 Philosophy and Argument in Late Vedānta

Srihar~a is recognised as one of the greatest exponents of what is generally known as the Sarpkara school of Advaita Vedanta. The Advaita Vedanta of Sarpkara has been commented upon, explained, expounded and developed in its various ramifications by several generations of scholars, commentators and original thinkers for over a thousand years. Even today it is claimed to be one of the two traditional schools of Indian Philosophy which have survived and have modern adherents while most other schools have died of old age on Indian soil. The only other school that has survived is the Nyaya-Vaise~ika or what is now called the Navya-nyaya. Both Advaita Vedanta and Navya-nyaya have attracted the attention of modern scholars and philosophers (of both India and abroad), who are acquainted with Western philosophy and whose interest in the study of Indian philosophy has not simply been limited to the history of Indian thought or Indology. Modern exponents of Advaita Vedanta are numerous. With a few notable exceptions, however, most modern authors of Vedanta try to expound and modernise the Advaita system from either a speculative and personal point of view or from a superficial viewpoint of Kantian philosophy or Hegelian Absolutism. Such a method has seldom achieved the sophistication and respectability that is normally expected in the context of modern (chiefly western) philosophic activity.