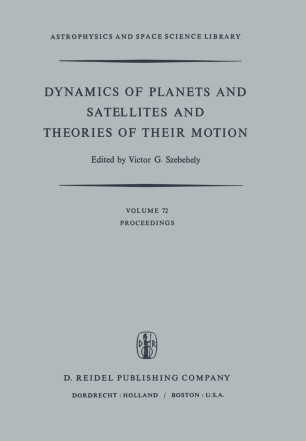 Dynamics of Planets and Satellites and Theories of Their Motion

Proceedings of the 41st Colloquium of the International Astronomical Union Held in Cambridge, England, 17–19 August 1976

P. J. MESSAGE University of Liverpool The papers which comprise this volume were presented at Colloquium No. 41 of the International Astronimical Union, which was held in Cambridge, England, from the 17th to the 19th of August, 1976, and had as its subject 'Dynamics of Planets and Satellites and Theories of their Motion'. The Colloquium was held just prior to the XVIth General Assembly of the Union (which was held from 24th August to 2nd September, in Grenoble, France) to provide an opportunity for the presentation of research papers on a number of active and lively branches of Celestial Mechanics to a gathering of experts in the field, and for the stimulus of discussion of research problems of interest to participants. A number of papers testify to the progress being made in General Planetary Theory, the theories of motion of the minor planets, the Moon, and the satellites of Jupiter and Saturn, and to significant advances in both the general and restricted gravitational problems of three bodies. The Organizing Committee of the Colloquium was comprised of J. Chapront, R. L. Duncombe, J. Hadjidemetriou, Y. Kozai, B. Morando, J. Schubart, V. Szebehely, and P. J. Message (Chairman). The local Organizer was D. C. Heggie, to whose tireless efforts the success of the arrangements is due. IX LIST OF PARTICIPANTS N. Abu-el-Ata, Bureau des Longitudes, 77 Avenue Denfert Rochereau, 75014 Paris, France K. Aksnes, Center for Astrophysics, 60 Garden Street, Cambridge, Massachusetts 02138, U. S. A.