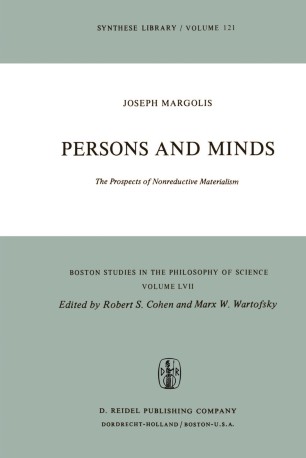 The Prospects of Nonreductive Materialism

Part of the Boston Studies in the Philosophy of Science book series (BSPS, volume 57)

Persons and Minds is an inquiry into the possibilities of materialism. Professor Margolis starts his investigation, however, with a critique of the range of contemporary materialist theories, and does not find them viable. None of them, he argues, "can accommodate in a convincing way the most distinctive features of the mental life of men and oflower creatures and the imaginative possibilities of discovery and technology" (p. 8). In an extraordinarily rich analysis, Margolis carefully considers and criticizes mind-body identity theories, physicalism, eliminative materialism, behaviorism, as inadequate precisely in that they are reductive. He argues, then, for ramified concepts of emergence, and embodiment which will sustain a philosophically coherent account both of the distinctive non-natural character of persons and of their being naturally embodied. But Margolis provokes us to ask, what is an em­ bodied mind? The crucial context for him is not the plain physical body as such, but culture. "Persons", he writes, "are in a sense not natural entities: they exist only in cultural contexts and are identifiable as such only by refer­ ence to their mastery of language and of whatever further abilities presuppose such mastery" (p. 245). The hallmark of persons, in Margolis's account, is their capacity for freedom, as well as their physical endowment. Thus he writes, " . . . their characteristic powers - in effect, their freedom - must inform the order of purely physical causes in a distinctive way" (p. 246).