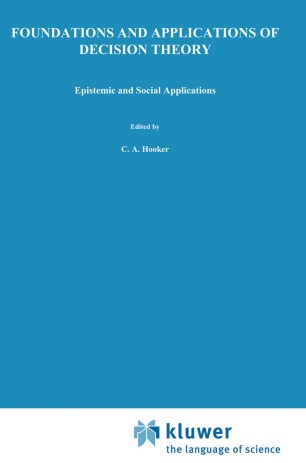 Foundations and Applications of Decision Theory

Part of the The University of Western Ontario Series in Philosophy of Science book series (WONS, volume 13b)

1. INTRODUCTION In the Spring of 1975 we held an international workshop on the Foundations and Application of Decision Theory at the University of Western Ontario. To help structure the workshop into ordered and manageable sessions we distri­ buted the following statement of our goals to all invited participants. They in turn responded with useful revisions and suggested their own areas of interest. Since this procedure provided the eventual format of the sessions, we include it here as the most appropriate introduction to these collected papers result­ ing from the workshop. The reader can readily gauge the approximation to our mutual goals. 2. STATEMENT OF OBJECTIVES AND RATIONALE (Attached to this statement is a bibliography; names of persons cited in the statement and writing in this century will be found referenced in the biblio­ graphy - certain 'classics' aSide. ) 2. 1. Preamble We understand in the following the Theory of Decisions in a broader sense than is presently customary, construing it to embrace a general theory of decision-making, including social, political and economic theory and applica­ tions. Thus, we subsume the Theory of Games under the head of Decision Theory, regarding it as a particularly clearly formulated version of part of the general theory of decision-making.