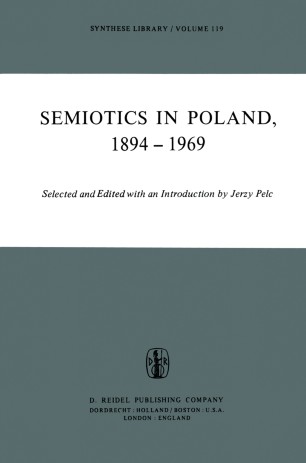 In the Introduction to the Polish-language version of the present book I expressed the hope that Polish studies in semiotics would before long be numerous enough to make possible another anthology on semiotics in Poland containing material published since 1970. That hope has in fact come true. The fact that semiotic research has been gaining momentum in this country is reflected in the growing interest in the discipline, in expanding international contacts, and in the steady increase in the number of publications. Thus, 1972 saw the setting up of the Department of Logical Semiotics, headed by the present writer, at Warsaw University Institute of Phi­ losophy. The seminar on semiotics, which I started in 1961, had met more than two hundred times by the end of 1976; since 1968, meetings have been held jointly with the Polish Semiotic Society. Another semi­ nar, confined to university staff and concerned with logical semiotics, which was inithted in 1970, had met more than fifty times by the end of 1976. The former seminar often plays host to foreign visiting pro­ fessors; so far scholars from Australia, Belgium, Britain, Canada, Czechoslovakia, France, the German Democratic Republic, Italy, the Netherlands, the Soviet Union, and the United States have attended.