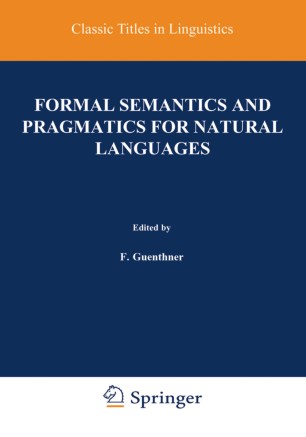 The essays in this collection are the outgrowth of a workshop, held in June 1976, on formal approaches to the semantics and pragmatics of natural languages. They document in an astoundingly uniform way the develop­ ments in the formal analysis of natural languages since the late sixties. The avowed aim of the' workshop was in fact to assess the progress made in the application of formal methods to semantics, to confront different approaches to essentially the same problems on the one hand, and, on the other, to show the way in relating semantic and pragmatic explanations of linguistic phenomena. Several of these papers can in fact be regarded as attempts to close the 'semiotic circle' by bringing together the syntactic, semantic and pragmatic properties of certain constructions in an explanatory framework thereby making it more than obvious that these three components of an integrated linguistic theory cannot be as neatly separated as one would have liked to believe. In other words, not only can we not elaborate a syntactic description of (a fragment of) a language and then proceed to the semantics (as Montague pointed out already forcefully in 1968), we cannot hope to achieve an adequate integrated syntax and semantics without paying heed to the pragmatic aspects of the constructions involved. The behavior of polarity items, 'quantifiers' like any, conditionals or even logical particles like and and or in non-indicative sentences is clear-cut evidence for the need to let each component of the grammar inform the other.