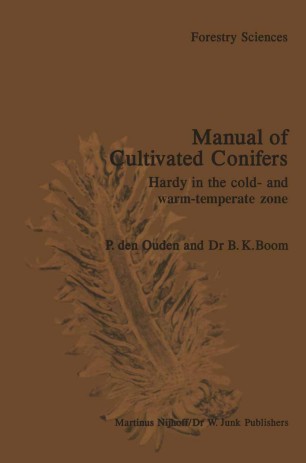 Hardy in the Cold- and Warm-Temperate Zone

As an introduction to the present book I would like to explain how it was, that I, a commercial nurseryman, became so keenly interested in Conifers and their nomen­ clature. In August 1924 the Dutch Dendrological Society was founded and at the same time a Committee for Nomenclature of woody plants was set up and I served on this committee as one of the members. Our first activity was to bring the catalogues of the various leading nurserymen in the Netherlands into line with the International Rules of Botanical Nomenclature and also to check their nursery stock. Formerly these catalogues had shown a rather confused nomenclature, nurserymen having usually made use of a variety of inconsistent books as guides in compiling their catalogues. In the course of the work a close co-operation between scientific and practical workers developed. Although I had also fully contributed to the correct naming of hardy shrubs and perennials, 1 was most interested in Conifers. I had tried out several species, had grown a wide choice of garden forms and selected types of particular merit for propagation. My special love for Conifers lead to the publication of my Name-list of Conifers (1937), which was adopted as a standard for varietal names at the International Horticultural Congress in Berlin (1938). Later I prepared my book 'Coniferen, Ephedra en Ginkgo' in the Dutch language (1949); compiling the Conifers cultivated or known to be grown in the Netherlands and Belgium at that time.