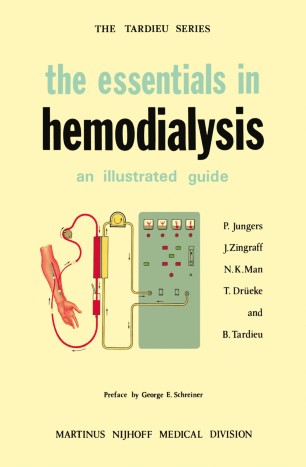 The Essentials in Hemodialysis

Part of the The Tardieu Series book series (TARD, volume 1)

At the end of 1976 there were 34,215 people with end-stage renal disease alive on dialysis and transplantation within the registry centers of the European Dialysis and Transplant Association (14:4, 1977). From July, 1973, when the American Government began to fund dialysis, the estimated number of dialysis patients in the United States has risen from 5,000 plus to over 35,000. Jfwe add other regions, such as Canada, Australasia and Latin America, it is safe to say that as this is written, over 100,000 people are living on dialysis. The u.s. Social Security System, Veterans Administration, Medicaid and State Agencies are now paying out over one billion dollars annually to support patients on dialysis in the U. S.A. Cobe, Redy, Travenol, Dow Cordis, Drake Willock, Gambro, Asahi, Erica and a host of other company names have become household words in many households throughout the world. I cite these factors not out of a pretense at precision or a passion for phenomenology, but simply to indicate that dialysis has become lore than this century's therapeutic miracle. (Perhaps the first treatable fatal chronic, terminal, medical disease I). It has also become big business! As such, it has perhaps become too important to be left solely in the hands of medical specialists, such as nephrologists.