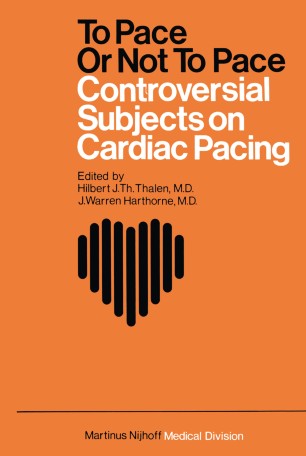 To Pace or not to Pace

The increasing number of pacemaker patients correlates with the number of pacemaker meetings that attract physicians and medical engineers entering this expanding branch of medicine. The Pacemaker Colloquium organised in Brussels April 21st and 22nd 1977 was such a meeting. It was different from previous meetings as it had no surveys or summaries on patient series but instead it focused on controversial subjects that have emerged from pacing in the past and on new developments for the future. Besides controversial papers on indications for temporary and long-term pacing, new technical developments were presented in Brussels, where for the first time the important lithium battery manufacturers demonstrated their data. The surveys on electrodes, especially the fixation mechanisms and the atrial electrodes, initiated an animated discussion. This all converged in a Round Table on the choice of the electrode-pacemaker combination. Pacemaker electrocar­ diography and the application of cardiac stimulation in various types oftachyar­ rhythmias formed two clinically oriented sessions. Mter a survey ofthe various follow-up systems a series of presentations deals for the first time with the possibilities and difficulties of the application of com­ puters in cardiac pacing. A Round Table on the organisation of the Pacemaker clinic closed this friendly and animated meeting. It is our sincere hope that the publication of the presented papers and dis­ cussions in these Proceedings will help all those active in cardiac pacing to answer some of their problems and to improve the treatment of pacemaker patients.