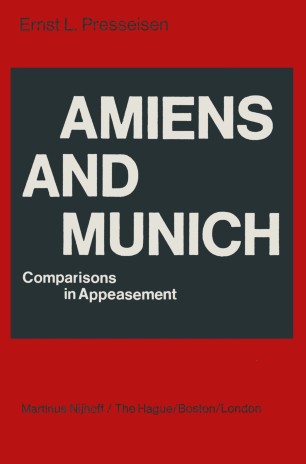 It has not been my intention to write a definitive study of appeasement. Such a work would have to include the French variety, Stalin's appeasement of Hitler between 1939 and 1941, or the appeasement of Japan in 1938 and 1939. I chose the British case for a number of reasons. The opportunity of a comparative model was a challenge, British appeasement was well known, and the structure of the British government remained rather the same in the intervening period between Waterloo and Dunkirk. I admit that Amiens and Munich represent the most dramatic episodes in the story of appeasement, but then the British struggles against Bonaparte and Hitler were of epic proportions. It was of course unnecessary "to prove" appeasement at Munich, but very few historians had looked at the treaty of Amiens in this way. Much of my research effort was therefore devoted to examining the published material of the earlier period. While I have used some original Addington documents, this work is not primarily an inquiry into unpublished sources but a rein­ terpretation of well known events that were made public long ago. The flood of publications and revelations of the 1930's continues unabated. I have tried to use the latest studies, especially those that have benefited from the thirty­ year rule. My debts of gratitude extend over a long period since two stints as chairman of the department have delayed this book by at least four years.