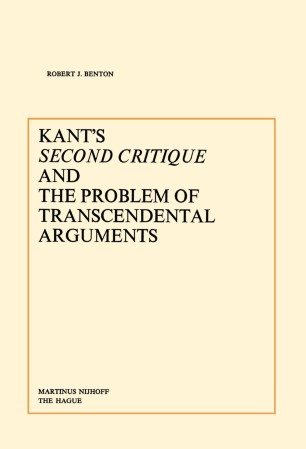 Kant’s Second Critique and the Problem of Transcendental Arguments

This work is in no way intended as a commentary on the second Cri­ tique, or even on the Analytic of that book. Instead I have limited myself to the attempt to extract the essential structure of the argument of the Analytic and to exhibit it as an instance of a transcendental argument (namely, one establishing the conditions of the possibility of a practical cognitive viewpoint). This limitation of scope has caused me, in some cases, to ignore or treat briefly concrete questions of Kant's practical philosophy that deserve much closer consideration; and in other cases it has led me to relegate questions that could not be treated briefly to appendixes ,in order not to distract from the development of the argu­ ment. As a result, it is the argument-structure itself that receives pri­ mary attention, and I think some justification should be offered for this concentration on what may seem to be a purely formal concern. One of the most common weaknesses of interpretations of Kant's works is a failure to distinguish the level of generality at which Kant's argument is being developed. This failure is particularly fatal in dealing with the Critiques, since in interpreting them it is important to keep clearly in mind that it is not this or that cognition that is at stake, but the possibility of (a certain kind of) knowledge as such.