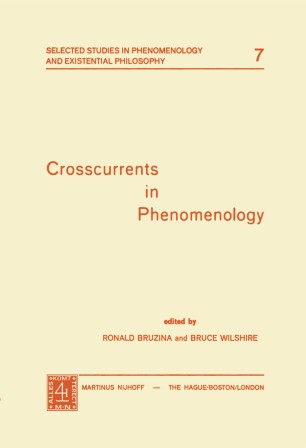 One of the greatest and oldest of images for expressing living change is that of the movement of waters. Rivers particularly, in their relentless motion, in the constant searching direction of their travel, in the confluence of tributaries and the division into channels by which identity is constituted and dispersed and once more reestablished, have stood as metaphors for movements in a variety of realms-politics, religion, literature, thought. Among philosophic movements, phenomenology and existential­ ism are discernible as one such movement of ideas analogous in configuration to the flow of a river in its channel or network of channels. The course taken by the stream of phenomenology and existential philosophy in North America is easily seen from the contents of the six volumes of collected papers from the annual meetings of the Society for Phenomenology and Existential Philo­ sophy that have preceded the present selection. What soon becomes clear in general, and is evident as well in the present volume, is that phenomenological and existential philosophies are far from being homogeneous, are far from showing an identity as to the sources from which they derive their energy, or the themes that they carry forward toward clarification. And yet there is a con­ fluence, a convergence of orientation, sympathy, and conceptuality, INTRODUCTION 4 SO that problematics harmonize and complement and mutually enrich.