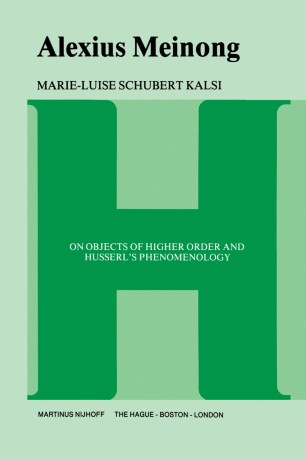 On Objects of Higher Order and Husserl’s Phenomenology

16. The General Subject Matter of Husserl's Phenomenology 45 17. General Thesis and Epoche 46 18. Doubt 47 19. Hyle and Noema 48 49 BIBLIOGRAPHY TRANSLATION OF SELECI'ED TEXTS REFERRED TO IN THE FOOTNOTES 51 INTRODUCTION SECTION I PREFACE Meinong was one of the great philosophers who stand at the beginning of Analytic Philosophy and Phenomenology. He was a contemporary of Husserl, Frege, Mach, and Russell who were either originally or physicists, except Meinong. Meinong was a historian mathematicians and always a philosopher who became increasingly interested in experi­ mental psychology, under the influence of Franz Brentano. He, as each of his contemporaries, developed his own philosophy. It grew, in a profound fashion, into a very rich realism which was, curiously enoug- based on a staunch empirical attitude. Of all these philosophers, Meinong and Husserl were most closely associated: both of them were students of Brentano and dealt, each. with his own philosophical tools, with the same subject matter, presentations and their objects. Meinong concerned himself, in short critical notes, with Husserl's phenomenology, that is, the first volume of Ideas . . . which was trans­ 1 lated by W. R. Boyce Gibson. The last section of this Introduction will be devoted to Meinong's criticism of Husserl. It is done in the last section because some of Meinong's theory is presupposed for the understanding of his critique of Husserl.