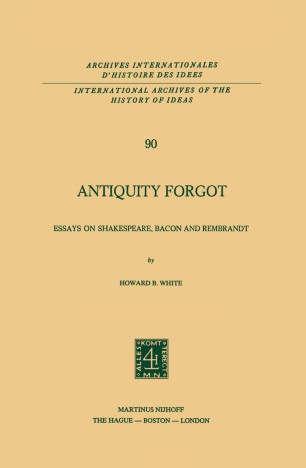 Essays on Shakespeare, Bacon and Rembrandt

Part of the International Archives of the History of Ideas Archives book series (ARCH, volume 90)

It was probably Rousseau who first thought of dreams as ennobling experiences. Anyone who has ever read Reveries du Promeneur Solitaire must be struck by the dreamlike quality of Rousseau's meditations. This dreamlike quality is still with us, and those who experience it find themselves ennobled by it. Witness Martin Luther King's famous "1 have a dream. " Dreaming and inspiration raise the artist to the top rung in the ladder ofhuman relations. That is probably the prevailing view among educated people of our time. Rousseau made that view respectable and predominant. Yet in another sense, the problem is much older. It is the problem of political philosophy and poetry, the problem of Socrates and Aristophanes, of Plato and Homer. Yet, while antiquity usually gives the crown to philosophy, since Rous­ seau, the alternative view tends to prevail. The distinction is not, however, a formal one. Sir Philip Sidney enlisted Plato on the side of poetry. The true distinction is between imagination and reason. If reason is to rule, as Aristotle points out,l the most architectonic of the sciences, that is political science, should rule. It is political philosophy which must determine the nature of the arts which will help or which will hinder the good of the city or the polity. That does not mean that a mere professor should stand in judgment of Shake­ speare, Bacon, and Rembrandt. It means that ifhe studies these three great artists, he is not over-stepping disciplinary limits.