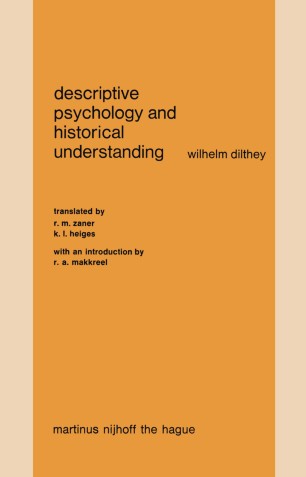 Perhaps no philosopher has so fully explored the nature and conditions of historical understanding as Wilhelm Dilthey. His work, conceived overall as a Critique of Historical Reason and developed through his well-known theory of the human studies, provides concepts and methods still fruitful for those concerned with analyzing the human condition. Despite the increasing recognition of Dilthey's contributions, relati­ vely few of his writings have as yet appeared in English translation. It is therefore both timely and useful to have available here two works drawn from different phases in the development of his philosophy. The "Ideas Concerning a Descriptive and Analytic Psychology" (1894), now translated into English for the first time, sets forth Dilthey's programma­ tic and methodological viewpoints through a descriptive psychology, while "The Understanding of Other Persons and Their Expressions of Life" (ca. 1910) is representative of his later hermeneutic approach to historical understanding. DESCRIPTIVE PSYCHOLOGY AND THE HUMAN STUDIES Dilthey presented the first mature statement of his theory of the human studies in volume one of his Einleitung in die Geisteswissenschaften (Introduction to the Human Studies), published in 1883. He argued there that for the proper study of man and history we must eschew the metaphysical speculation of the absolute idealists while at the same time avoiding the scientistic reduction of positivism.