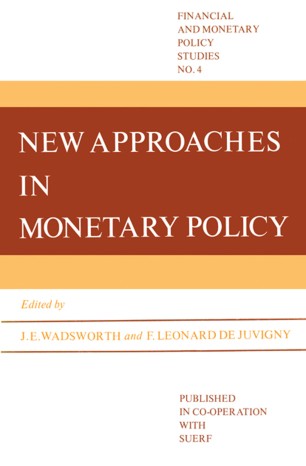 The Colloquium at Wiesbaden was the seventh in a series organized by the Societe Universitaire Europeenne de Recherches Financieres (SUERF) at intervals since 1969. The titles, places and dates of previous Colloquia are noted on page ii, with brief particulars of the ensuing publications. From the beginning, the emphasis has been on money and finance in a European setting, and the most recent Colloquium, held in Wiesbaden for the three days beginning on September 29, 1977, followed this well-established pattern. The subject, "New Approaches in Monetary Policy", was divided into four aspects, each discussed in separate commissions, as described in the General Report (since the languages used by SUERF are English and French, it appears in the original French on page 327, and in an English translation, on page 355. Three other chapters and the Preface are in French. ) The separate commissions, each with its own chairman and rapporteur, were addressed by the authors of the specially written papers, all experts, active in their fields, and they also led the discussions. M. Raymond Bertrand, the President ofSUERF, was Chairman for the Colloquium as a whole, which was in plenary session for the opening and closing meetings. The Rapporteur General was Professor Paul Coulbois, whose report is mentioned above. Attendance at the Colloquium has risen over the years, and so has the number of papers presented.