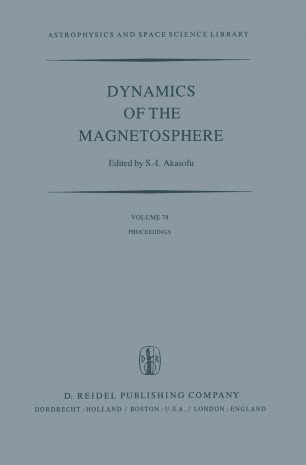 Dynamics of the Magnetosphere

The Los Alamos Chapman Conference on Magnetospheric Substorms and Related Plasma Processes can be considered the fourth in a series devoted to magnetospheric substorms, after the Moscow (1971), Houston (1972), and Bryce Mountain (1974) meetings. The main motivation for organizing the Los Alamos Conference was that magnetospheric substorm studies have advanced enough to the point of bringing experimenters, analysts and theorists together to discuss major substorm problems with special emphasis on theoretical interpretations in terms of plasma processes. In spite of an extremely heavy schedule from 8:30 A.M. to 10:00 P.M., every session was conducted in an enjoyable and spirited atmosphere. In fact, during one of the afternoons that we had put aside for relaxation, John Winckler led a group of the attendees in a climb to the ceremonial cave of a prehistoric Indian ruin at Bandelier National Monument, near Los Alamos under a crystal blue sky and a bright New Mexico sun. There, they danced as the former dwellers of the pueblo had, perhaps as an impromptu evocation of a magnetospheric event.