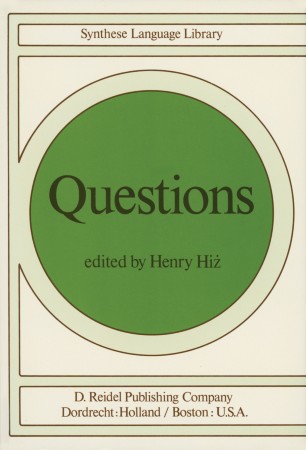 To the philosopher, the logician, and the linguist, questions have a special fascination. The two main views of language, that it describes the world, and that it expresses thought, are not directly applicable to questions. Ques­ tions are not assertions. A question may be apt, sharp, to the point, impor­ tant, or it may be inappropriate, ambiguous, awkward, irrelevant or irreverent. But it cannot be true or false. It does not have a truth value not just because an utterance like Was the letter long? does not indicate which letter is being talked about. The indicative The letter was not long has the same indeter­ minacy. In actual context the anaphoric definite article will be resolved both for a question and for an indicative sentence. Contextual resolutions are easily found for most cross-references. A question cannot be either true or it does not describe a state of affairs. Neither does it express false, because thought, because it is an expression of suspended thought, of lack of judge­ ment. To dress it in other philosophical styles, a question is not a judgment, it is not a proposition, it is not an assertion. A philosopher may try to paraphrase a question as an indicative sentence, for instance as a statement of ignorance, or as a statement of the desire to know. Hintikka, Wachowicz and Lang explore this territory. Or he may interpret it as a meta statement intimating the direction in which the flow of the discourse is going.