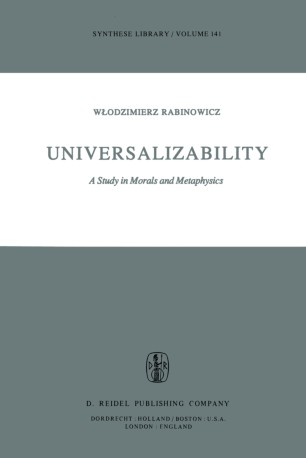 A Study in Morals and Metaphysics

1. 1. The Principle of Universalizability-an informal explication This work is concerned with the so-called Principle of Universalizability. As we shall understand it, this principle represents a claim that moral properties of things (persons, actions, state of affairs, situations) are essentially independent of their purely 'individual' or-as one often says -'numerical' aspects. l Thus, if a thing, x, is better than another thing, y, then this fact is not dependent on x's being x nor on y's being y. If a certain person, a, has a duty to help another person, b, then this duty does not arise as a consequence of their being a and b, respectively. And if in a certain situation, W, it ought to be the case that certain goods are transferred from one person to another, then this moral obligation does not depend on the individual identities of the persons involved. The Universalizability Principle may also be expressed in terms of similarities. Instead of saying that the moral properties of x are essentially independent of the individual aspects of x, we may say that any object which is exactly similar to x, which is precisely like x in all non-individual, 'qualitative' respects, must exhibit exactly similar moral properties. Thus, if two persons are exactly similar to each other, (if they are placed in exactly similar circumstances, have exactly similar information, preferences, character, etc. ), then they will have exactly similar rights and duties.