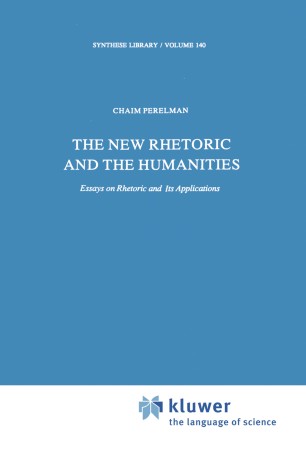 The New Rhetoric and the Humanities

Essays on Rhetoric and its Applications

Modern logic has Wldergone some remarkable developments in the last hun­ dred years. These have contributed to the extraordinary use of formal logic which has become essentially the concern of mathematicians. This has led to attempts to identify logic with formal logic. The claim has even been made that all non-formal reasoning, to the extent that it cannot be formalized, no longer belongs to logic. This conception leads to a genuine impoverishment of logic as well as to a narrow conception of reason. It means that as soon as demonstrative proofs are no longer available reason will no longer dominate. Even the idea of the 'reasonable' becomes foreign to logic and such expres­ sions as 'reasonable decisions', 'reasonable choice' or 'reasonable hypotheses' would be put aside as meaningless. The domain of action, including method­ ology and everything that is given over to deliberation or controversy - i.e., foreign to formal logic - would become a battleground where necessarily the reason of the strongest would always prevail.