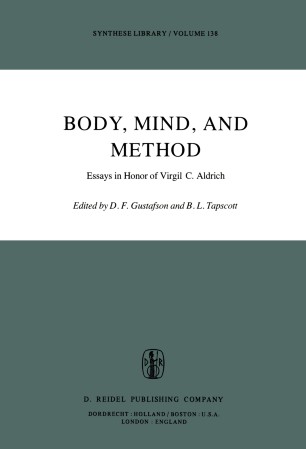 Simple seeing. Plain talking. Language in use and persons in action. These are among the themes of Virgil Aldrich's writings, from the 1930's onward. Throughout these years, he has been an explorer of conceptual geography: not as a foreign visitor studying an alien land, but close up 'in the language in which we live, move, and have our being'. This is his work. It is clear to those who know him best that he also has fun at it. Yet, in the terms of his oft-cited distinction, it is equally clear that he is to be counted not among the funsters of philosophy, but among its most committed workers. Funsters are those who attempt to do epistemology, metaphysics, or analysis by appealing to examples which are purely imaginary, totally fictional, as unrealistic as you like, 'completely unheard of'. Such imaginative wilfullness takes philosophers away from, not nearer to, 'the rough ground' (Wittgenstein) where our concepts have their origin and working place. In the funsters' imagined, 'barely possible' (but actually impossible) world, simple seeing becomes transformed into the sensing of sense-data; plain talk is rejected as imprecise, vague, and misleading; and per­ sons in action show up as ensouled physical objects in motion. Then the fly is in the bottle, buzzing out its tedious tunes: the problem of perception of the external world; the problem of meaning and what it is; the mind-body problem. Image-mongering has got the best of image-management.