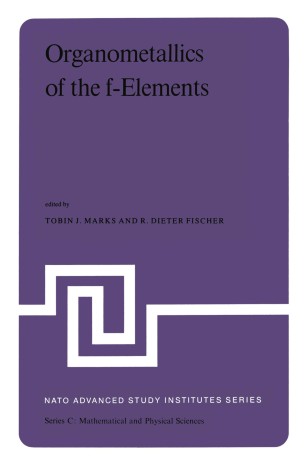 While the organometallic chemistry of the d-block transition elements has been a flourishing field for the past 25 years, it has only been in the last several years that dramatic activity and progJ'ess has occurred in the area of lanthanide and actinide organometallic chemistry. The f. -element organometallic research effort has been truly multinational and multidisciplinary. In a large number of countries, sCientists have become increasingly interested in the synthesis, reactivity, spectroscopy, and the molecular and electronic structures of f-element organometallic compounds. The backgrounds of these scientists range from organic, inorganic, nuclear, and catalytic chemistry to chemical and nuclear physics. The motivations for the study of f-element organometallics have been equally varied. In the area of basic research, there has been a growing realization that the lanthanides and actinides represent two unique and, to a great extent, neglected families of elements in which many fascinating aspects of chemistry and bonding remain to be explored. On a more practical level, an increasing number of these elements play important roles in nuclear energy production and in industrial catalytic processes. It has become apparent that efficiency and safety in both areas could greatly benefit from increased knowledge. In the past there has been no suitable international forum available for bringing together researchers in the diverse areas of f-element organometallic science mentioned above.