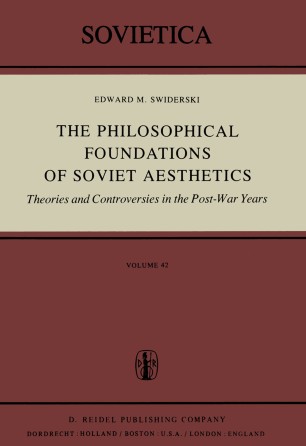 The Philosophical Foundations of Soviet Aesthetics

Theories and Controversies in the Post-War Years

0. 1. GENERAL DESCRIPTION OF THE PROBLEMATIC This study is devoted to an examination of a concept of crucial significance for Soviet aesthetics - the concept of the aesthetic (esteticeskoe). Soviet aestheticians have for some time already been trying to design a concept of the aesthetic that would satisfy, on the one hand, the requirements of aesthe­ tic phenomena, and, on the other hand, the principles of the Marxist-Leninist world view. The first part of this work shows how the concept of the aesthetic has been and continues to be problematic for Soviet aestheticians. This task is carried out by dwelling, first of all, on the controversies among Soviet aesthe­ ticians concerning meta-aesthetic issues, viz, the nature and scope of aesthetics as well as its place among other philosophical and non-philosophical disci­ plines. A particularly clear view of the problems that have traditionally pre­ occupied Soviet aestheticians is provided by an examination of what they standardly call the 'method of aesthetics', where 'method' is understood in the sense of an explanatory framework rather than in the strict logico-scien­ tific sense of the term. This discussion will provide the occasion to pass in review the main periods of Soviet aesthetics and the characteristic aspects of each. The chapter on the sources of contemporary Marxist-Leninist aesthetics brings into relief the lack of a homogeneous tradition in the question of the nature of the aesthetic and other related problems.