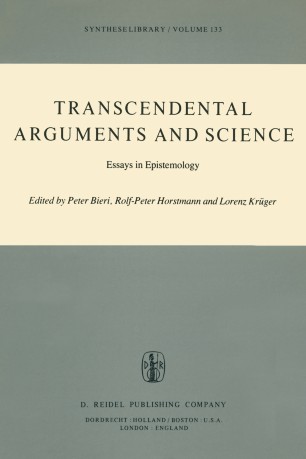 The goal of the present volume is to discuss the notion of a 'conceptual framework' or 'conceptual scheme', which has been dominating much work in the analysis and justification of knowledge in recent years. More specifi­ cally, this volume is designed to clarify the contrast between two competing approaches in the area of problems indicated by this notion: On the one hand, we have the conviction, underlying much present-day work in the philosophy of science, that the best we can hope for in the justifi­ cation of empirical knowledge is to reconstruct the conceptual means actually employed by science, and to develop suitable models for analyzing conceptual change involved in the progress of science. This view involves the assumption that we should stop taking foundational questions of epistemology seriously and discard once and for all the quest for uncontrovertible truth. The result­ ing program of justifying epistemic claims by subsequently describing patterns of inferentially connected concepts as they are at work in actual science is closely connected with the idea of naturalizing epistemology, with concep­ tual relativism, and with a pragmatic interpretation of knowledge. On the other hand, recent epistemology tends to claim that no subsequent reconstruction of actually employed conceptual frameworks is sufficient for providing epistemic justification for our beliefs about the world. This second claim tries to resist the naturalistic and pragmatic approach to epistemology and insists on taking the epistemological sceptic seriously.