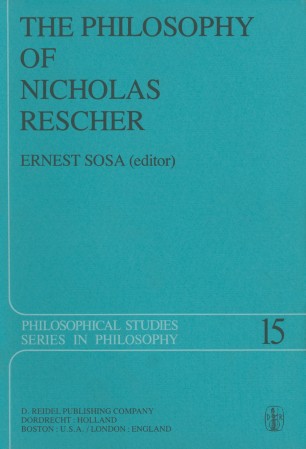 The Philosophy of Nicholas Rescher

When I entered the graduate program in philosophy at the University of Pittsburgh in 1961, Nicholas Rescher had just joined the department of philosophy' to begin, with Adolf Grunbaum, the building of what is now a philosophy center of worldwide renown. Very soon his exceptional energy and versatility were in evidence, as he founded the American Philosophical Quarterly, generated a constantly rising stack of preprints, pursued impor­ tant scholarly research in Arabic logic, taught a staggering diversity of histori­ cal and thematic courses, and obtained, in cooperation with Kurt Baier, a major grant for work in value theory. That is all part of the record. What may come as a surprise is that none of it was accomplished at the expense of his students. Papers were returned in a matter of days, often the next class meet­ ing. And so easily accessible was he for philosophical discussion that, since (inevitably) we shared many philosophical interests, I asked him to serve as my dissertation advisor. My work in connection with this project led to a couple of journal articles while his, characteristically, led to a book. Our dis­ cussions certainly helped me, and while they may also have had some small influence on him, in the end our views were quite distinct. I was not only allowed complete independence, but was positively encouraged to think of my own ideas and to develop them independently. The length and breadth of Rescher's bibliography defy belief.