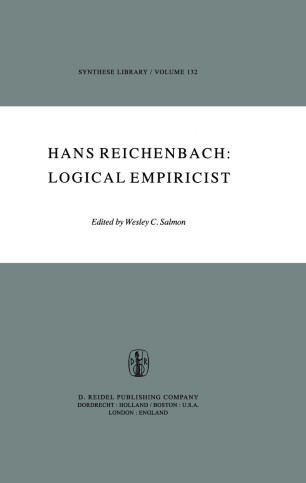 Logical empiricism - not to be confused with logical positivism (see pp. 40-44) - is a movement which has left an indelible mark on twentieth­ century philosophy; Hans Reichenbach (1891-1953) was one of its found­ ers and one of its most productive advocates. His sudden and untimely death in 1953 halted his work when he was at the height of his intellectual powers; nevertheless, he bequeathed to us a handsome philosophical inheritance. At the present time, twenty-five years later, we can survey our heritage and see to what extent we have been enriched. The present collection of essays constitutes an effort to do just that - to exhibit the scope and unity of Reichenbach's philosophy, and its relevance to current philosophical issues. There is no Nobel Prize in philosophy - the closest analogue is a volume in The Library of Living Philosophers, an honor which, like the Nobel Prize, cannot be awarded posthumously. Among 'scientific philosophers,' Rudolf Carnap, Albert Einstein, Karl Popper, and Bertrand Russell have been so honored. Had Reichenbach lived longer, he would have shared the honor with Carnap, for at the time of his death a volume on Logical Empiricism, treating the works of Carnap and Reichenbach, was in its early stages of preparation. In the volume which emerged, Carnap wrote, "In 1953, when Reichenbach's creative activity was suddenly ended by his premature death, our movement lost one of its most active leaders.