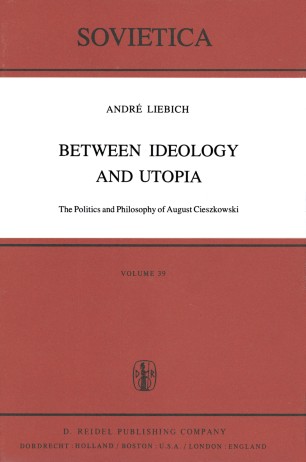 Between Ideology and Utopia

The Politics and Philosophy of August Cieszkowski

Nineteenth-century European intellectual history has given rise to such varied and abundant research that one is surprised to find certain important problems long identified and yet still relatively unexplored. Such is the case for certain aspects of the crucial transition from Hegel to Marx, for minority tendencies among French socialists and for the Messianic phenomenon, national and religious, so central to the period, particularly in Eastern Europe, and so rarely studied in detail. Certainly, these lacunae are exemplified by the absence of any com­ prehensive work on August Cieszkowski whose overall contribution to the history of the period may be marginal but whose specific role in each of the areas mentioned is both significant in itself and illustrative of certain wider problems. Cieszkowski first achieved recognition as the author of the Pro­ legomena zur Historiosophie in 1838. This short tract never became popular among the Berlin Hegelians for whom it was intended but it affected a number of radical intellectuals outside their circle. His next work, Gott und Palingenesie, was a defense of personal immortality against Hegelian revisionism. The following year, however, he founded as a bulwark of the Hegelian school the Philosophische Gesellschaft against external critics and internal dissolution.