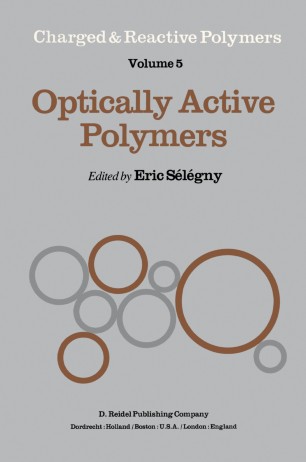 The first four volumes of the series on 'Charged and Reactive Polymers' have been devoted to polymers in solution (Voh. I and II) or in gel and membrane forms (Vols. III and IV). In correlation with charges, other physical or chemical properties of macro­ molecules have been considered. Understanding of charge and hydrophobic effects is equally important for synthetic and biopolymers or their systems. Optically Active Polymers are related to problems of the same class, since optical activity is an inherent property of both natural macromolecules as well as a great variety of polymers synthesized in the Jast twenty years. Optical activity is a physical spectral property of chiral matter caused by asymmetrical configurations, conformations and structures which have no plane and no center of symmetry and consequently have two mirror image enantiomeric forms of inverse optical rotation. The racemic mixture of chiral enantiomers is optically inactive. The most common form of optical activity was first measured at a constant wavelength by the angle of rotation of linearly polarized light. More recently the measurements have been extended to the entire range of visible and attainable ultraviolet regions where electronic transitions are observed, giving rise to the ORD technique (Optical Rotatory Dispersion). The Cotton effects appear in the region of optically active absorption bands; outside of these bands the plain curve spectrum is also dependent on all the electronic transitions of the chromophores.